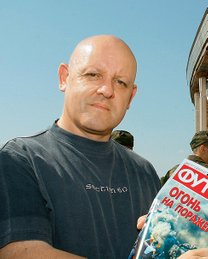 'The most famous author you've probably never heard of!'

With just over one and a half million books sold worldwide as well as three multi-award winning feature films on his CV, former serviceman and BAFTA member Dougie Brimson has forged a reputation as one of the UK's most diverse writers.

Perhaps best known for penning the cult movie Green Street (Elijah Wood, Charlie Hunnam) his first book Everywhere We Go (first published in 1996) remains a firm favourite amongst football fans the world over whilst his debut novel, The Crew, has enjoyed an almost unbroken ten year run at the top of the soccer charts of both Amazon and iTunes.

This website contains details of all Dougie's sixteen books and three feature films as well as information on future projects including the forthcoming feature films being developed through his production company, Red Bus Movies. These include, The Battle Of Stathie Manor, Three Greens and the forthcoming TV drama, The 45th.

Please click on the relevant page link on the left for further information.

IN THE KNOW is out NOW!