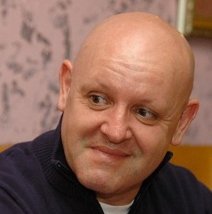 In recent years, former serviceman Dougie Brimson has emerged as one of the UK's most diverse writers.

Perhaps best known for penning the multi-award winning feature Green Street, his writing career began in 1996 when after 18 years service with the RAF, he co-authored the best-selling non-fiction work Everywhere We Go. A book that remains essential reading for anyone with an interest in the culture of English football.

A further 14 books have followed including the crime thriller The Crew which has topped the Amazon sports book download charts for almost 9 years following its publication in eBook format and the comedy Wings of a Sparrow which after a successful electronic release, was issued in print.

His 16th book, In The Know, the long awaited third book in the The Crew/Top Dog trilogy, will be published in May 2020.

In 2003 Dougie made the move into screenwriting first with the critically acclaimed short movie It’s a Casual Life and then with his first full length feature, the Hollywood funded Green Street starring Elijah Wood. Following its release in September 2005, the film won numerous awards including:

May 2014 saw the release of his second feature, an adaptation of his own novel Top Dog. Directed by Martin Kemp (The Krays, Eastenders) the film took the  Best Feature award at the British Independent Film Festival as well as the Best Actor (Leo Gregory),  Best Supporting Actor (Ricci Harnett) and Best Supporting Actress (Lorraine Stanley) awards. It has also been nominated in the Best Action Film category at the National Film Awards 2015.

A third feature, the urban revenge thriller We Still Kill The Old Way starring Ian Ogilvy, James Cosmo, Steven Berkhoff and Danni Dyer, was released on 16th December 2014. It has been nominated in numerous categories, including Best Action Film at the 2015 Actionn Elite Awards.

Film projects in development include adaptations of his comedy novel Wings of a Sparrow as well as the comedies A Slice of Life and The Battle For Stathie Manor. The military thrillers Boots on the Ground and Three Greens are also on his slate of projects.

A highly qualified engineer, is a member of both The British Legion and The Falklands Veterans Association (SAMA82).